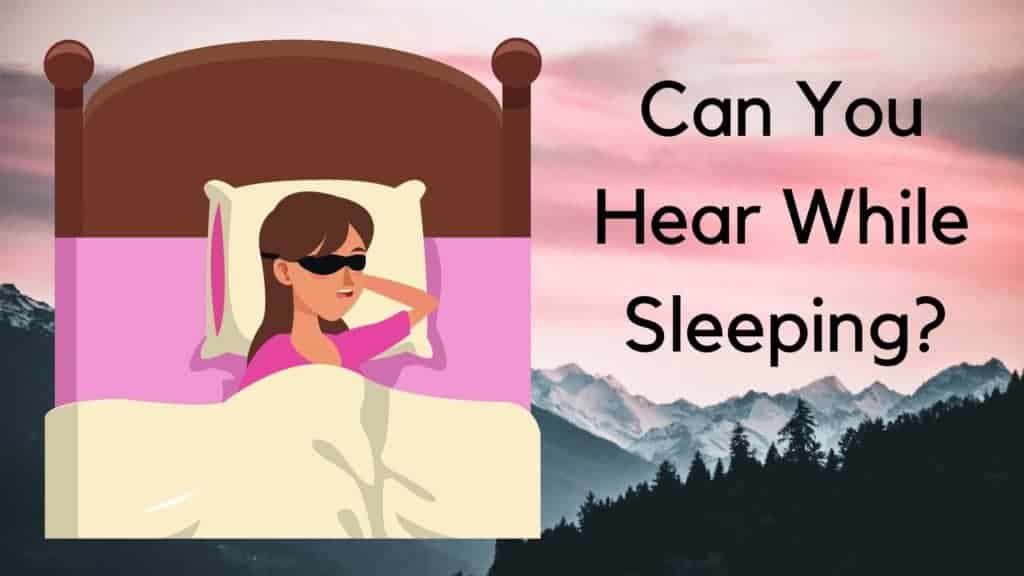 Can You Hear While Sleeping?

We commonly think of sleep as a time where the brain and body shut down and does not receive or process information from the external environment. But the brain is actually more active during sleep than we think. Throughout the duration of sleep, we move through several sleep cycles which include different stages and in some of these stages, the brain is more active and is able to hear and process sound – even though you may not remember the following day!

To better understand how we can hear while sleeping, it is useful to know more about the process of sleeping. Sleep is not just one state of rest but is a multifaceted process that involves sleep cycles. One sleep cycle consists of four stages that people cycle through during their sleep. People typically experience 4-6 sleep cycles during one night of sleep that are comprised of the following stages:

Cycling through these sleep stages allows the body to rest and rejuvenate which helps restore all the body’s systems. This is critical for cognitive, mental, and physical health. Understanding these stages also illuminates how we are able to hear while sleeping.

In a 2019 study, published in the Human Nature Behavior Journal, researchers investigated the capacity to hear during sleep. They did this by reproducing the “cocktail party problem” which describes hearing multiple sounds at the same time but choosing which sound to focus on. We do this all of the time – having a conversation in a restaurant, talking to multiple people at a social event etc. To do this, researchers exposed participants to sounds while sleeping by playing two types of sounds – one in each ear – while people slept.

One voice communicated complete sentences and phrases while the other, communicated in a type of gibberish that was unclear. While people in the study were exposed to these sounds, researchers kept track of brain activity via EEG recordings (which monitors the brain). Researchers found that the brain was actually alert and paying attention to the speech that was being clearly communicated “as if the brain was turning its internal volume up for this particular speaker,” Thomas Andrillon, lead author of the study commented. The brain absorbed these cohesive sentences in a way that it did not with the incoherent sounds being played in the other ear.

This study is among the research that shows that the brain is more active during parts of the sleep cycle. It can absorb and respond to external sounds in the environment which means you can absolutely hear during sleep. This makes sense because the brain is more alert during particular sleep stages (like stage 4) where there is greater activity. Similar to having dreams though, you may not always remember (or even be aware) hearing particular sounds or speech during your sleep!