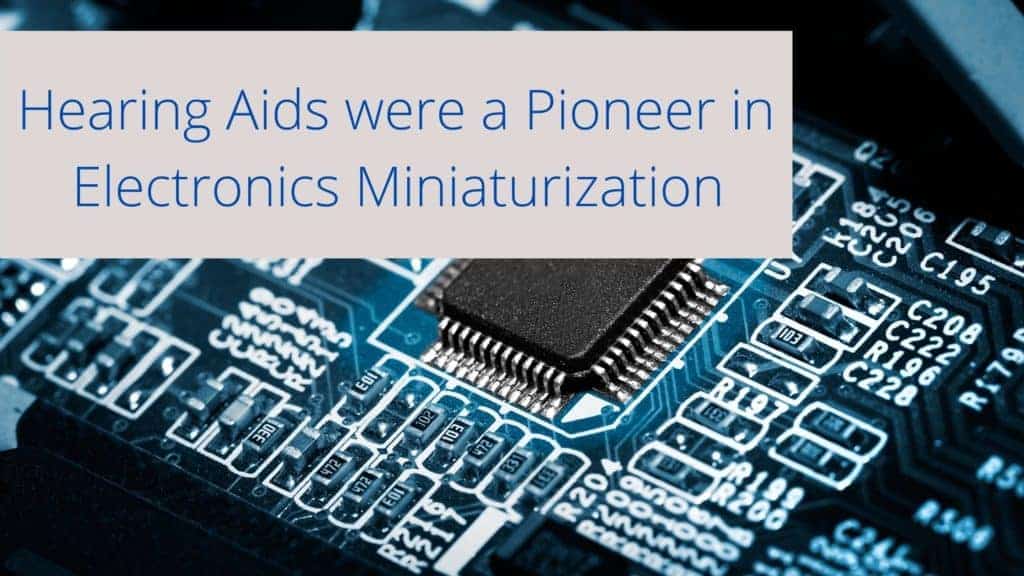 Hearing Aids were a Pioneer in Electronics Miniaturization

Today’s hearing aids are so small and discreet they often go completely unnoticed by the casual observer. Despite their small size, hearing aids are also delivering clearer, more nuanced sound processing than ever before. Such tiny yet powerful devices are a triumph in microcomputers and they are continuing to improve their technology.

But how did hearing aids become so small and strong? The answer may surprise you: hearing aids have long been a leading technology field in miniaturizing electronics. Out of necessity, hearing aid research and development has continued to strive for components that are not only powerful solutions to hearing loss, but can be used discreetly by those with hearing loss.

The first known hearing aids were hearing trumpets, large horns that were held up to the ear to help amplify incoming sounds. Hearing trumpets were somewhat effective, but also unwieldy and worked best for sounds, such as speech, directly spoken into the trumpet. Hearing trumpets appeared in the 17th century and were the primary form of hearing assistance until the late 1800s.

In the final decades of the 19th century, the idea for electronic hearing aids followed swiftly behind the other world-changing audio advancements of the telephone and the microphone. Combining the sound enhancing power of these two new technologies, hearing aids relied on the tools the telephone used to enhance sound and the amplifying power held in a microphone.

The 1948 invention of the transistor in Bell Laboratories has had wide-ranging effects across all fields of technology and electronics. In the years following World War II, hearing aids became one of the early applications for this new technology. While far from perfect, transistor-based hearing aids allowed the size of devices to decrease dramatically to portable, handheld and wearable devices.

The first experiments with transistor hearing aids gave the first indication of how big the challenges were for developing miniature wearable hearing aids. Initial transistor hearing aids malfunctioned frequently because their components were not adequately protected from the heat and moisture of the human body and it’s ear canal. Alongside the push to make hearing technology smaller was the development of new protective substances that would allow small components to meet the needs of challenging conditions.

In the search for new durability and efficiency, transistors were eventually manufactured with silicone which in turn led to the development of the integrated circuit which was adopted early by hearing aid manufacturers as the backbone of the digital hearing aid.

The leap into digital sound is what has allowed hearing aids to come so far in the past half century. The first digital hearing aids often combined digital and analog technologies into a hybrid device. In the 1980s and 1990s, hearing aids became less conspicuous, but still had the tendency to be very visible devices worn in the outer ear.

Today’s devices showcase the steady progress into nuanced digital sound processing and modern technological integration. Most hearing aids are now designed to be inconspicuous, some being virtually invisible to the observer. This is all due to an industry-wide push to make electronics miniaturization not just a priority but a necessity. The powerful, durable hearing aids of today owe their technology to the engineers, scientists and designers who pushed technology to meet the needs of those with hearing loss.

If you are ready to experience the life-changing benefits of hearing aids, contact us today!