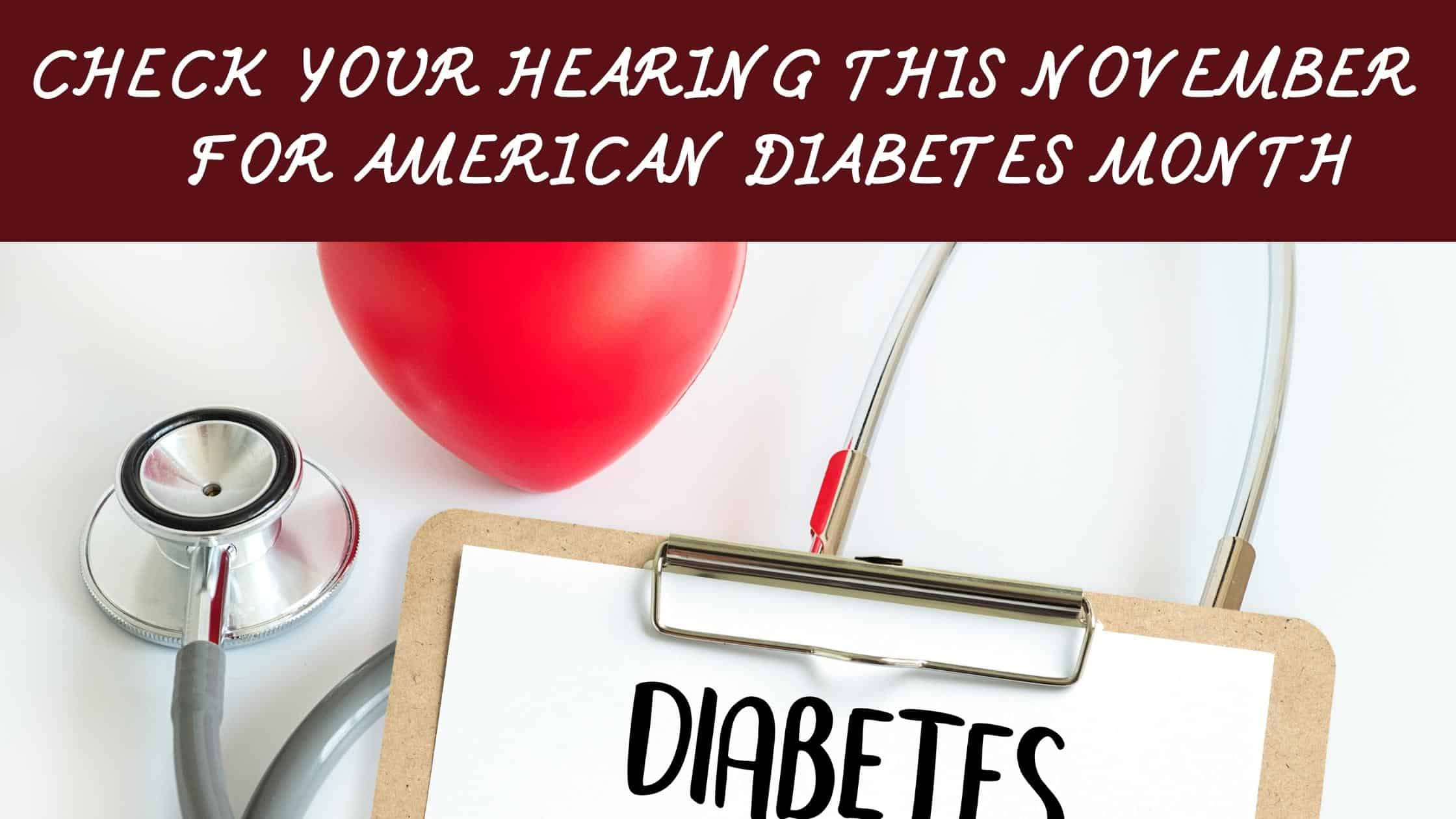 Check Your Hearing This November for American Diabetes Month

Have you recently been diagnosed with diabetes? If so, it’s important to remember that you are not alone. More than 34 million people (1 in 10) in the U.S. have diabetes and the number of people affected is projected to rise to 1 in 3 people by 2050. November is American Diabetes Month; a campaign designed to educate and raise awareness about this condition. When we fully understand this disease, its risk to their health and what we can do to protect ourselves, we have a chance to slow the ever-growing prevalence of this disease.

For many, it is difficult to grasp exactly how diabetes affects the body and that keeps many of us from taking the steps to prevent it. Diabetes is a chronic condition that impacts how the body utilizes energy from the food we eat. When we eat, food turns into sugar and in the bloodstream. The pancreas, a small organ in the abdomen, creates a hormone called insulin, which aids in cell absorption of glucose, throughout our bodies.

As diabetes develops, it prevents the body from either creating insulin or utilizing the insulin, effectively. This, in turn, creates excess blood sugar in the bloodstream which damages cells, which support functions across body systems. Possible long-term effects include heart attack, stroke, and problems with the kidneys, eyes, gums, feet, nerves, and ears.

As hearing health care specialists, we are particularly concerned with diabetes’ risk to our hearing. While it is commonly understood that diabetes can lead to amputations and heart issues, hearing loss’ connection to diabetes often goes ignored. This is in part due to the gradual onset of hearing loss. Damage to the ears can be caused by numerous factors such as loud noise, impact to the head, exposure to harmful chemicals and chronic blood diseases, such as diabetes.

While it may not seem like hearing loss is an emergency, the sooner you treat it, the more likeliness you have of preventing many chronic issues. This is because, primarily, issues with hearing are impediments in communication. It becomes increasingly difficult to understand speech, which creates loneliness, chronic depression, anxiety, lack of mobility, and cognitive decline which often progresses into dementia. This is why, If you have been diagnosed with diabetes, it is important to include hearing loss in your diabetes treatment.

Researchers have found that the occurrence of hearing loss in patients with diabetes is more than double. A 2008 study, conducted by the National Institute on Deafness and Other Communication Disorders, collected data from 1999 to 2004 on patients, between the ages of 20-69, with hearing ability and diabetes. The study determined that those with diabetes were more likely to also have hearing loss, particularly with high-frequency sounds.

While it is commonly accepted that hearing loss is connected to diabetes, it is not confirmed the exact connection. The major theory revolves around how sensorineural hearing loss. While we hear with our ears, we comprehend sound with our brain and when it cannot be delivered properly, we have sensorineural hearing loss. The transfer of sound to the brain revolves around tiny hair-like cells, called stereocilia, which rely on a steady supply of blood. When they don’t receive blood due to high blood sugar levels, associated with diabetes, the stereocilia, can become permanently damaged.

Hearing loss can be effectively treated. In almost 90 percent of instances, hearing aids can amplify sounds around you, so your brain can receive them again. This can allow you to connect to friends and family and excel at work, due to improved communication. Your brain is not forced to strain to comprehend which in turn reduces the effects of cognitive decline and you are more likely to stay active and engaged in life.

Schedule a Hearing Exam This November

The inactivity which undiagnosed hearing loss often causes is a major risk factor for diabetes patients. Regular exercise, along with a diet rich in vegetables and lean meats, while avoiding processed sugars, can lower your blood sugar and keep your diabetes under control. If you have recently been diagnosed with diabetes, then your hearing health could be at risk. This November, take action. Schedule a hearing exam today.